A Believer for Life

You may have reservations about becoming an organ donor, especially concerning how your religion views your decision. In fact, all major religions support organ, tissue and cornea donation as a way of helping others, as an individual’s right to choose and as an unparalleled gift of generosity and compassion. 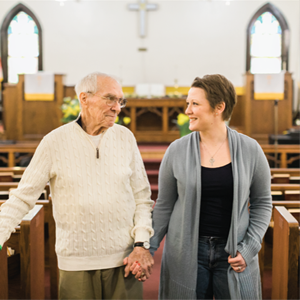 Organ, tissue and cornea donation is viewed as an act of neighborly love and charity by these denominations. The church encourages all members to support donation as a way of helping others.

The Amish will consent to transplantation if they know that it is for the health and welfare of the transplant recipient. John Hostetler, an authority on Amish religion, says in his book Amish Society that “The Amish believe that since God created the human body, it is God who heals the body. There’s nothing in the Amish understanding of the Bible that forbids them from using modern medical services, including surgery, anesthesia, hospitalization, dental work, blood transfusions and immunization.”

The Southern Baptist Convention in 1988 passed a resolution supporting donation as a way to alleviate suffering and demonstrate compassion for the needs of others. The church leaves the personal decision up to the individual and donation is supported as an act of charity.

Buddhists believe that organ, tissue and cornea donation is a matter of individual conscience and place high value on acts of compassion. There’s an importance of letting loved ones know that your wishes are known. Many families of Buddhists faith will not give permission to donate unless they know their loved one wanted to be a donor.

Catholics view organ, tissue and cornea donation as an act of charity, love and self-sacrifice. Donation is morally and ethically acceptable. Pope John Paul II stated, “The Catholic Church would promote the fact that there is a need for organ donors and that Christians should accept this as a ‘challenge to their generosity and fraternal love’ so long as ethical principles are followed.”

Christian Scientists normally rely on spiritual means of healing instead of medical. The question of donation is an individual decision. They are free, however, to choose whatever form of medical treatment they desire, including transplants.

The Episcopal Church passed a resolution in 1982 that recognizes the life-giving benefits of organ, tissue and cornea donation. All those of Episcopal belief are encouraged to become donors “as part of their ministry to others in the name of Christ, who gave his life in its fullness.”

The church approves donation provided that it betters human life thorough transplantation that would lead to improvements in the treatment and prevention of disease.

Organ, tissue and cornea donation is an individual decision and Hindus are not prohibited by religious law from donation their organs or tissues. According to H.L. Trivedi in Transplanting Proceedings, “There is nothing in the Hindu religion indicating that parts of humans could not be used to alleviate the sufferings of other humans.”

Evangelicals have no opposition to organ, tissue and cornea donation. Each church is autonomous and leaves the decision to donate up to the individual.

The Islam religion strongly believes in the principle of saving human life. According to A. Sachedina in Transplanting Proceedings, “The majorities of the Muslim scholars belonging to various schools of Islamic law have invoked to principle of priority of saving human life and have permitted the organ transplant as a necessity to procure that noble end.”

There is strong support and encouragement for organ, tissue and cornea donation within all branches of Judaism. According to many authorities, if one is in a position to donate to save another’s life, it is permitted (and some say even obligatory) to do so, even if he or she never knows who the beneficiary will be. The infinite worth of a human being and the imperative to save a life when and where possible is a basic principle of Jewish law and ethics.

The Lutheran Church calls on its members to consider donation and to make any necessary family and legal arrangements to do so. Lutherans passed a resolution in 1984 stating that donation contributes to the well-being of humanity and can be “an expression of sacrificial love for a neighbor in need.”

The Mennonite faith has no formal position on donation. There are no restrictions against donation and transplantation. Church officials state such decisions are individual ones.

The Church of Jesus Christ of Latter-day Saints believes the decision to donate is an individual one made in conjunction with family, medical personnel and prayer. They do not oppose donation.

Presbyterians encourage and support donation. They respect a person’s right to make decisions regarding his or her own body. The following resolution was made in the Presbyterian Church U.S.A.: Therefore, be it resolved that the Presbyterian Church U.S.A. recognize the life-giving benefits of organ and tissue donation, and thereby encourage all Christians to become organ and tissue donors as a part of their ministry to others in the name of Christ, who gave life that we might have life in its fullness.

Officials for the Quaker faith do not have an official position on organ, tissue and cornea donation or transplantation. The decision, they say, is an individual one.

Unitarian Universalists widely support organ and tissue donation, but leave the decision to each individual. They affirm the inherent worth and dignity of every person and respect the interdependent web of all existence.

The United Methodist Church issued a policy regarding organ and tissue donation in 1984. It stated: “The United Methodist Church recognizes the life-giving benefits of organ and tissue donors by signing and carrying cards or driver’s licenses, attesting to their commitment of such organs upon their death, to those in need, as part of their ministry to others in the name of Christ, who gave his life that we might have life in its fullness.”